5 Ancient Greek Funeral Customs You May (or May Not) Recognize

The funeral ritual…is a public, traditional, and symbolic means of expressing our beliefs, thoughts, and feelings about the death of someone loved. – Dr. Alan Wolfelt

Since the beginning of time, human beings have honored the lives of people they love and respect. From RIP social media posts to attending a visitation or funeral service, we all feel the need to acknowledge the lives of others in a meaningful way. Unsurprisingly, the ancient Greeks felt the same. But what IS surprising is how similar some of their funeral customs are to what we practice today. Let’s take a look!

5 Ancient Greek Funeral Customs You May (or May Not) Recognize

While some funeral customs evolved and changed over their long history, the Ancient Greeks were consistent in their desire to ensure that every human being received proper burial rites. In fact, to deny someone the dignity of a final tribute was an intentional insult and could affect their ability to make a peaceful transition to the afterlife. While we no longer hold the same cultural or religious beliefs as the Ancient Greeks, we do still honor the dead in similar ways. 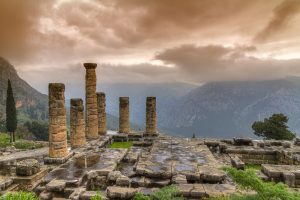 #1 – Prothesis (Preparation of the Body and Viewing)

Immediately after death, the first step in the process was to prepare the deceased’s body for viewing. Today, this process is completed by funeral professionals, but in Ancient Greece, female relatives prepared the body. These women:

Preparation was typically completed in one day. On the second day, the body was placed on a bed in the home and covered with a funeral shroud. Then, family and friends were allowed to stop by to mourn and pay their respects. During the viewing, either female relatives or professional mourners led a formalized lament. 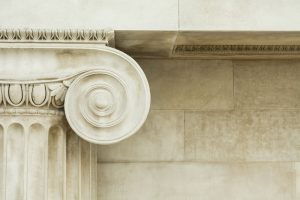 Before dawn on the third day, the body was removed from its place of honor in the home and either placed in a horse-drawn carriage or carried by pallbearers to the final resting place. Along the way to the cemetery, the ekphora (funeral procession) grew in number as more and more people joined the line of mourners. Often, singers and musicians walked alongside friends and family. Together, they expressed themselves through mournful songs and physical expressions of grief (like tearing of the clothing).

Once the procession reached the cemetery, the body was placed in an elaborately carved box, which was then either buried or burned on a funeral pyre. At this time, a eulogy was usually given to commemorate the person’s life.

Funeral processions are still a common practice today. In many places, drivers stop their vehicles to allow the funeral procession to pass without difficulty – a small way to honor life and pay respects to the person who has died. 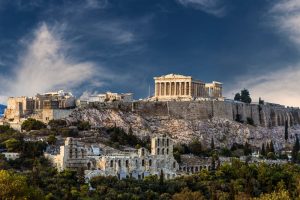 After the death of a loved one, it’s important to spend time together, share stories, reminisce, and draw comfort from each other. As human beings, we often do this around food.

In Ancient Greece, following the burial, it was customary for the women to return home and prepare a banquet in honor of the deceased. The men would stay behind at the gravesite and place a stele (monument) over the grave. The feast not only honored the person who died, it was also a way to bring people together and to thank those who came to pay their respects.

At many funeral or memorial services today, a meal is included – often called a gathering – where people are encouraged to talk, laugh, and share. It’s a time to support each other, to listen, and to remember the person who has died through the sharing of cherished memories.

It’s so important to take part in acts of remembrance after a loved one dies. These acts give you a way to physically engage with your feelings, which in turn, helps you express them, rather than bottle them up.

In Ancient Greece, they:

Do some of these sound familiar to you?

While statues and tombs are less common now, grave markers and meaningful epitaphs are still widespread. We conduct services to honor a loved one’s life, though the practice has become more concentrated rather than spread over time. It’s not uncommon to see coins, flowers, or stuffed animals left at a graveside in remembrance. And some families or cultures participate in decorating the grave (a famous example is the Day of the Dead).

#5 A Mix of Burial and Cremation

While pop culture and movies often associate cremation with Ancient Greece, burial was just as prevalent, if not more so. Beginning around 3000 B.C, burial was the chosen final disposition (except in Athens), but around 1100 B.C., cremation on a funeral pyre began to appear. Eventually, the two existed together as options for families until the rise of Christianity made burial more popular again.

Today, we see this same paradigm in our own world. Some families choose burial and others choose cremation. Both are great options, depending on the family’s needs and wants. Thankfully, no matter which option is chosen, the family can still honor and celebrate life with a personalized service.

Looking back at Ancient Greek funeral customs just reinforces the importance of a final tribute. No matter what culture or year you look at, honoring life and individual people is valuable and important.