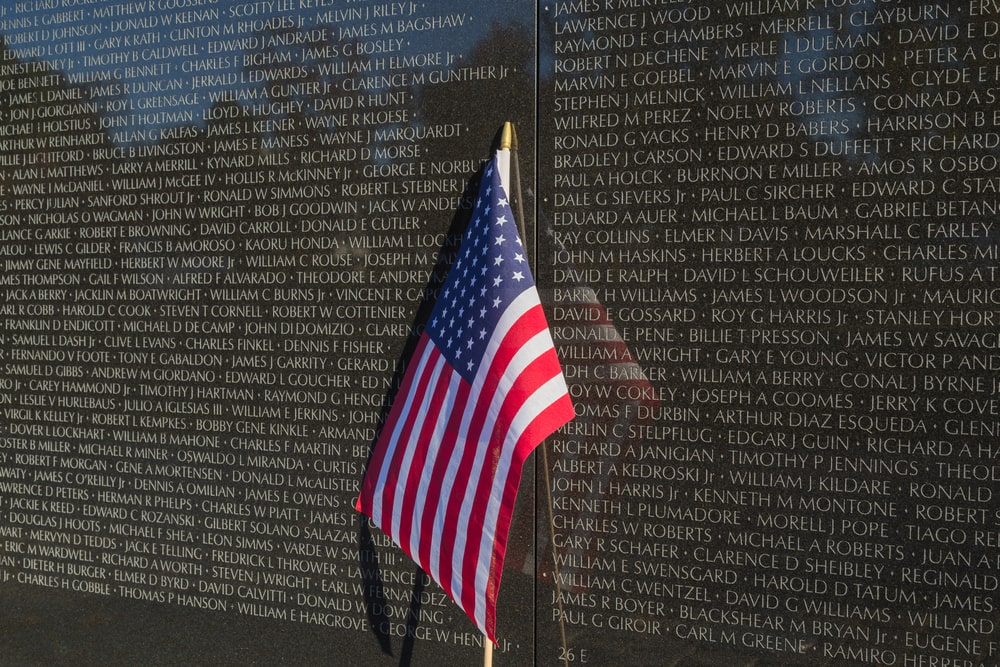 “Our nation honors the courage, sacrifice and devotion to duty and country of its Vietnam veterans.”

– Inscription on the Memorial Wall at the Vietnam Veterans Memorial 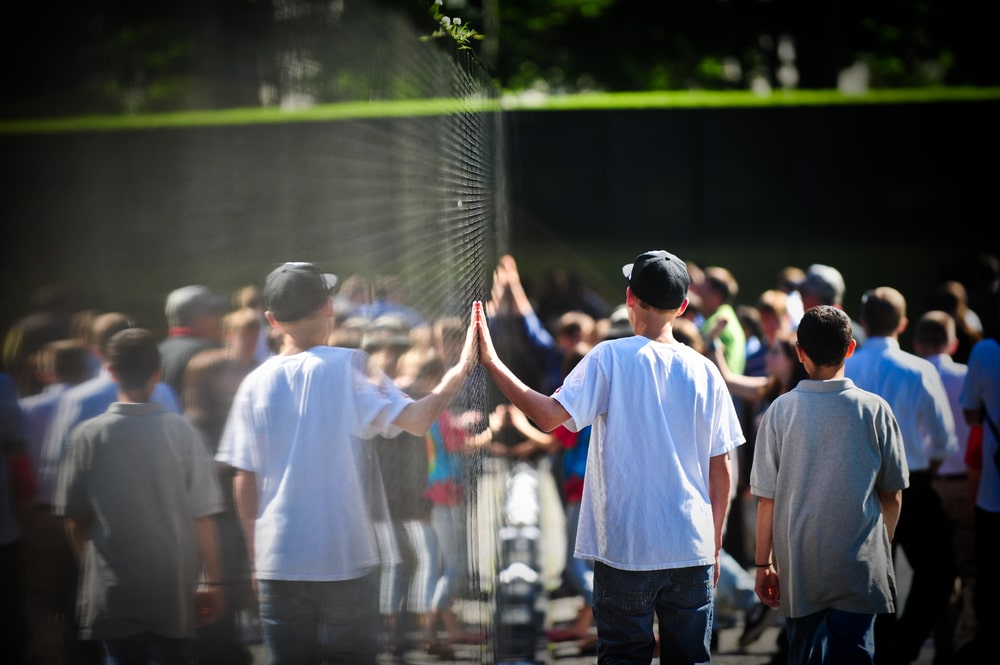 Dedicated on November 13, 1982 (Veterans Day), the Vietnam Veterans Memorial exists to honor the courage, sacrifice, and devotion of our American men and women who served in the Vietnam War (Nov 1955 – Apr 1975). Of the 3 million people who died during the conflict, more than 58,000 were Americans. The memorial not only honors the memory of those who died in hostile encounters but all those who served. This includes those still considered missing and the women who served as nurses.

How it Came to Be

In April 1979, the Vietnam Veterans Memorial Fund was established with the intent to fund a memorial for Vietnam veterans. Jan C. Scruggs, a wounded Vietnam veteran himself, began the call for a memorial, saying that it would help bring healing to the roughly 3 million Americans who served in the war. Within three years, private donations raised $8.4 million, which included contributions from more than 275,000 Americans.

In July 1980, Congress chose and authorized a site for the memorial. In order to determine the memorial’s design, several federal agencies arranged a competition. By March 30, 1981, they received more than 1,400 submissions. For the sake of fairness and anonymity, no names accompanied the entries. Each entry had an assigned number. In the end, it was entry number 1,026 that won – a woman named Maya Lin. 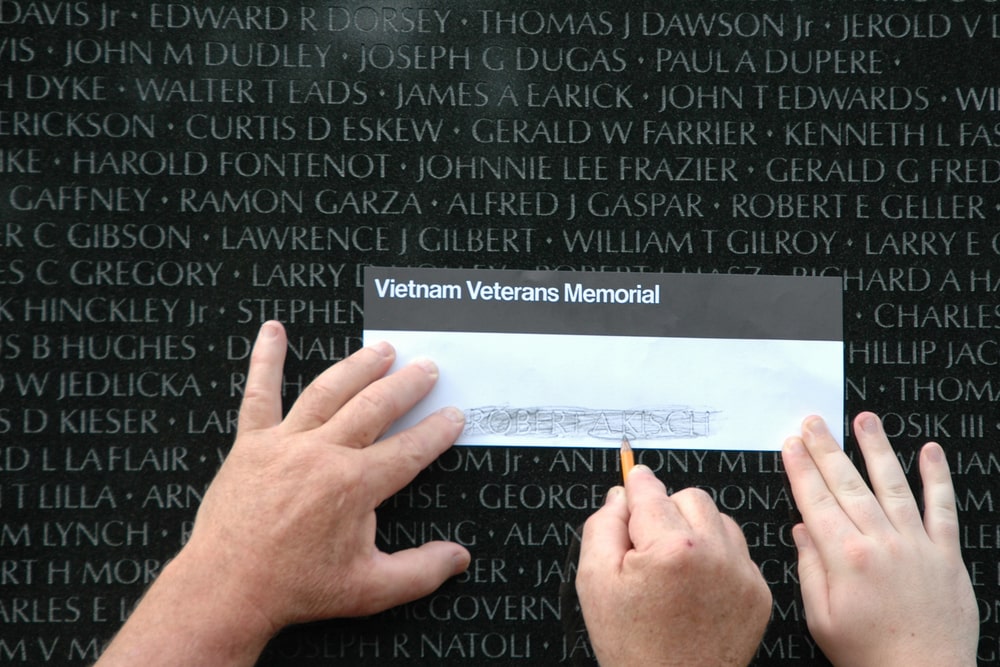 Due to some controversy surrounding Lin’s design (some thought it too greatly resembled a large tombstone), it was decided to commission Frederick Hart (another design competition entrant) to create a more traditional sculpture. This is how The Three Soldiers came to be. The dedication for The Three Soldiers took place on November 11, 1984, two years after the Memorial Wall.

On November 11, 1993, the Women’s Vietnam Memorial dedication took place. It was designed by Glenna Goodacre to honor the women of the United States who served in the Vietnam War. 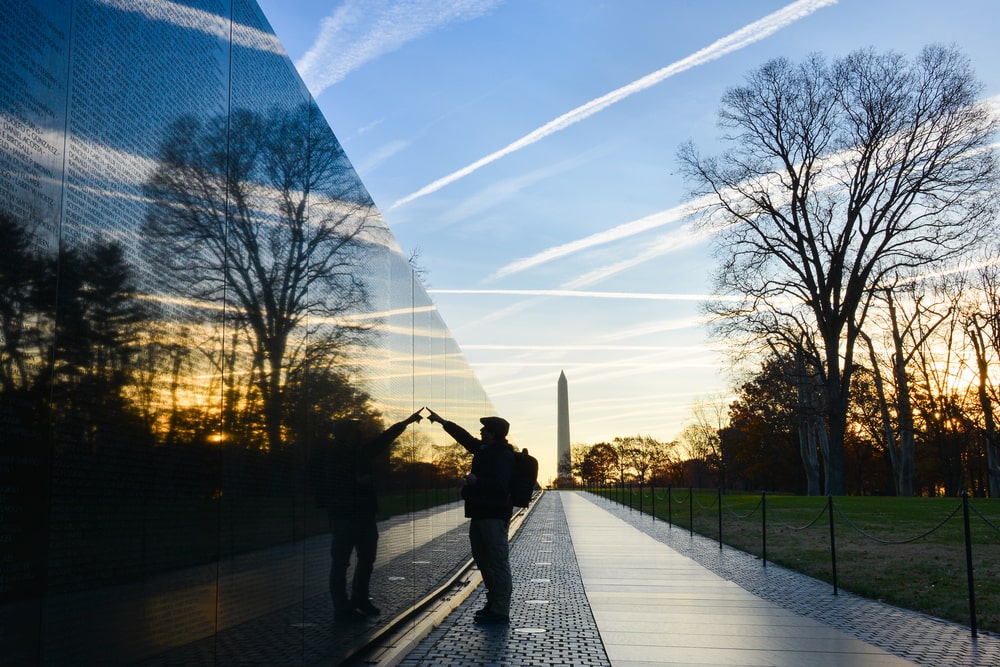 The Memorial Wall consists of two long, granite walls (246 feet long, 9 inches deep), each polished to a high sheen to create a mirror effect. Each wall possesses 72 panels (144 panels total), each etched with the names of servicemen. When you look at the wall, you can see your own reflection as well as the etched names. This was Maya Lin’s way of symbolically bringing the past and the present together.

At its dedication, the wall listed 57,939 names, but as of May 2018, there are 58,320 names, including eight women. The number of names on the wall differs from the official numbers because some families requested the omission of a veteran’s name. The etched names include all service members declared dead (not necessarily killed in action) as well as those whose status is unknown (missing in action).

Listed in chronological order, the listed names are based on the date of their casualty. Oftentimes, visitors create a rubbing as a memento of their loved one. They place a piece of paper over a name, and using a crayon or pencil, transfer the inscription to paper. 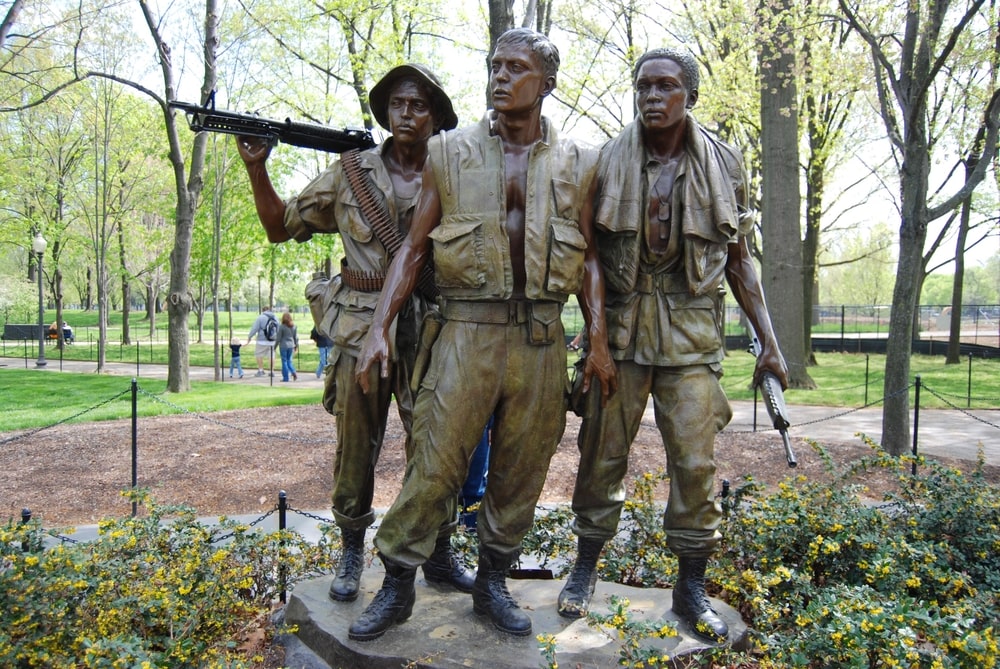 Located a short distance from the Memorial Wall, the more traditional bronze statue of three soldiers stands. At the time of its selection, some people disapproved of the memorial wall’s design. Due to dissenting opinions, The Three Soldiers was commissioned to add a more traditional element. Frederick Hart created the statue that now stands.

The Three Soldiers depicts men who represent the ethnic groups most heavily involved in the war’s combat forces – a Hispanic man, an African American man, and a Caucasian man. From their final placement, it appears as if the three men are looking at the Memorial Wall, as if giving silent tribute to their fallen comrades. 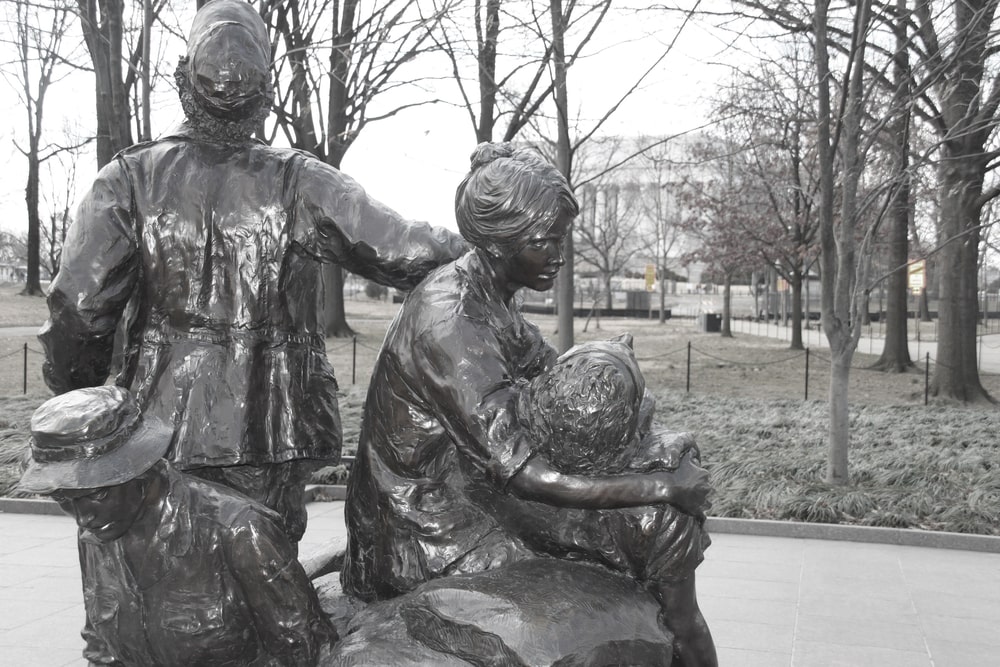 Added at a later date, the Vietnam Women’s Memorial honors the thousands of women who served during the Vietnam War, mostly as nurses. Designed by gifted sculptor Glenna Goodacre, the statue depicts three uniformed women with a wounded soldier.

Diane Carlson, a former Army nurse, first advocated for a memorial to recognize the women’s contribution to the war effort. After ten years, Presidents Reagan and Bush approved the memorial. The dedication took place on November 11, 1993. The addition of the Women’s Vietnam Memorial marked the first establishment of a memorial in the nation’s capital to recognize the patriotic service of women.

Established on November 10, 2004, the “In Memory” plaque is a final notable feature of the memorial. Placed near The Three Soldiers, the plaque honors veterans who died after the war as a direct result of injuries suffered in Vietnam but who are not eligible for placement on the Memorial Wall (per Department of Defense guidelines). This includes those who died from PTSD-related illnesses, Hodgkin’s and Parkinson’s, exposure to chemicals like Agent Orange, and cancer.

Made of black granite (2 feet tall, 3 feet wide), the inscription reads: “In memory of the men and women who served in the Vietnam War and later died as a result of their service. We honor and remember their sacrifice.”

Permanent memorials ensure a lasting tribute for those who have been loved and lost. They also allow us, as people, to honor those we wish to always remember. Just as we create memorials for our heroes, we also create them for our loved ones. Permanent memorials are important for five key reasons.

For many of our veterans, a large-scale memorial honors the group as a whole, like the Vietnam Veterans Memorial. However, headstones, grave markers, or inscriptions set in place by their families honor them as individuals. Both types of memorialization are important and honoring to our veterans and our loved ones. 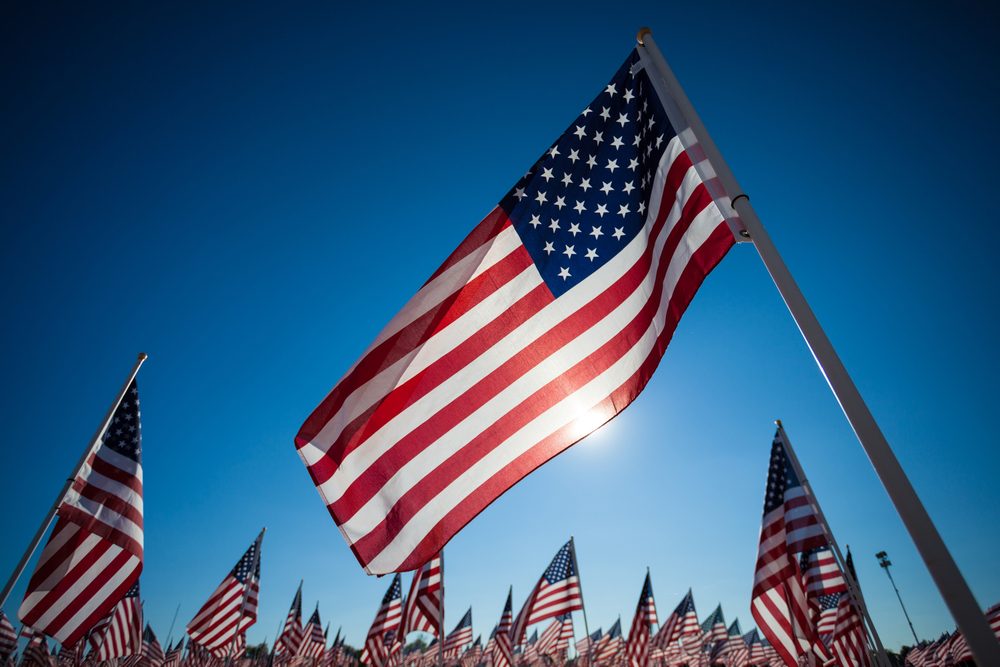 In 2017, as part of the 35th anniversary commemoration of the memorial, all 58,282 names were read aloud in the days just prior to Veterans Day. Volunteers, Vietnam veterans, family members of fallen Vietnam veterans, and employees of the Vietnam Veterans Memorial Fund began reading the names early in the week and only took a break between midnight and 5 a.m. Every five years, a group of volunteers read aloud each person’s name. This tradition remembers each person individually and honors them specifically.

If you would like to support our Vietnam veterans, consider partnering with Vietnam Veterans of America, an organization that offers veterans services and outreach programs for Vietnam veterans.