“In steel and granite, water and earth, the creators of this memorial have brought to life the courage and sacrifice of those who served in all branches of the Armed Forces from every racial and ethnic group and background in America. They represent, once more, the enduring American truth: From many we are one.” – President Bill Clinton at the Korean War Veterans Memorial Dedication Ceremony on July 27, 1995 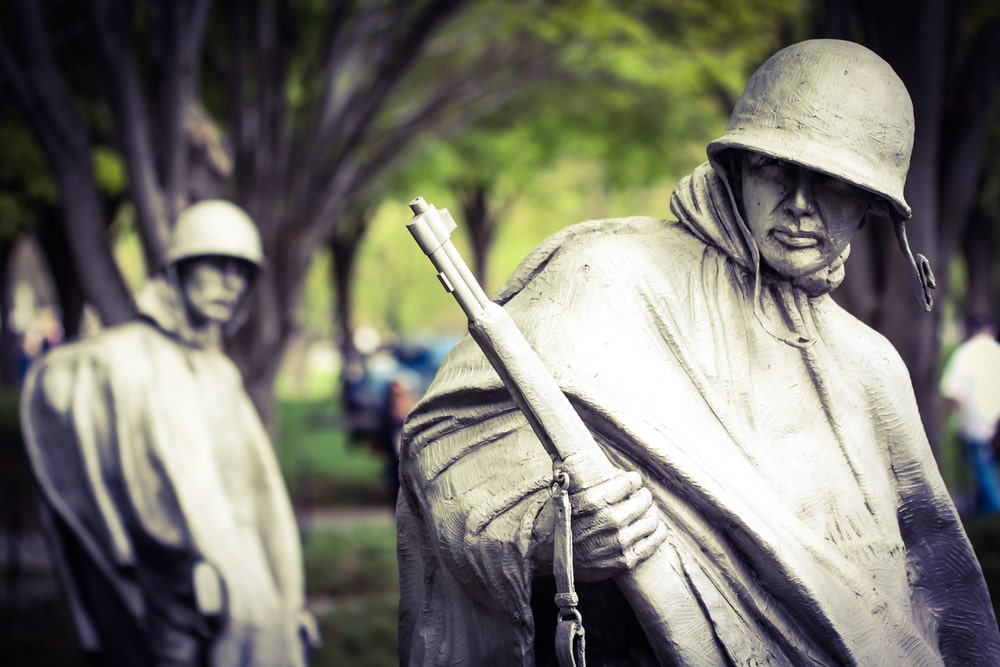 The Korean War Veterans Memorial in Washington, D.C. was dedicated on July 27, 1995, and was constructed to honor and memorialize the 5.8 million Americans who served in the Armed Forces during the Korean War (1950-1953). During its three short years, the Korean War claimed the lives of 36,574 Americans. Additionally, 103,284 Americans received wounds during the conflict.

The memorial also recognizes 22 members of the United Nations that contributed both troops and medical support throughout the war.

Congress received a petition for a Korean War memorial, and on April 20, 1986, they signed it into law. Under the guidance of the Korean War Veterans Memorial Advisory Board, Cooper-Lecky Architects designed the memorial. They, in turn, employed several designers to complete plans for the memorial.

President George H. W. Bush conducted the groundbreaking ceremony on June 14, 1993. Just two years later, on July 27, 1995, President Bill Clinton and Kim Young Sam, President of the Republic of Korea, officially dedicated the memorial. The dedication day was significant because it marked the 42nd anniversary of the armistice that ended the war. 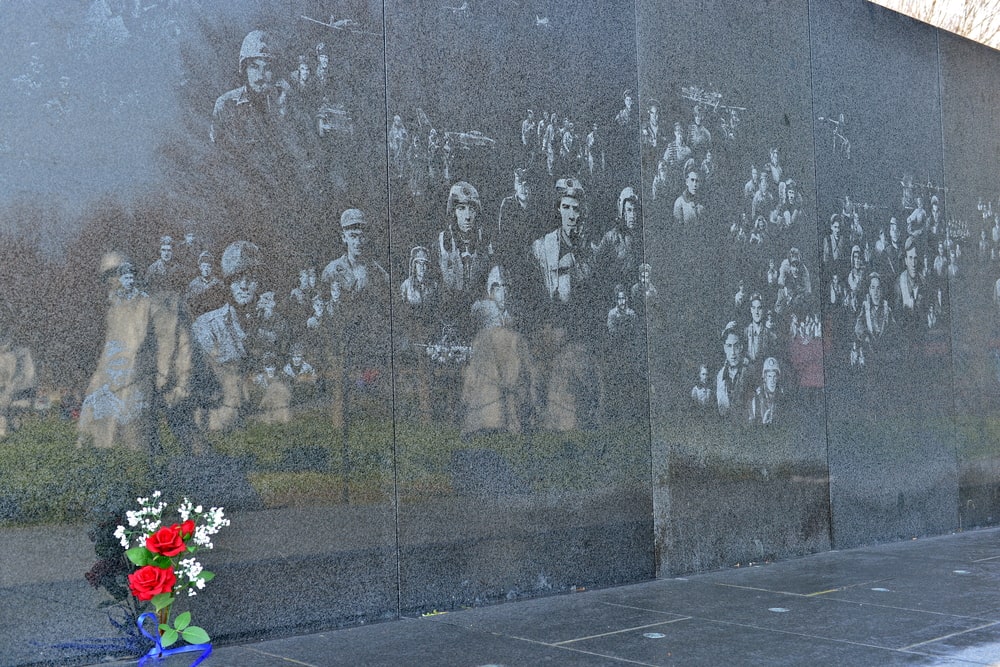 Located in West Potomac Park, just southeast of the Lincoln Memorial, the Korean War Veterans Memorial makes a lasting impression on those who view it. On the dedication stone, these words appear:

Our nation honors her sons and daughters
who answered the call to defend a country
they never knew and a people they never met.

There are several prominent features to the memorial, each one significant and intentional.

The memorial is built in the form of a triangle, with the tip intersecting the Pool of Remembrance. One side of the triangle is the mural wall, designed by Louis Nelson. Made of polished black granite (164 feet long, 8 inches thick), the mural wall consists of 41 different panels with over 2,400 photographs from the Korean War sandblasted onto the granite. The images selected represent Army, Navy, Marine Corps, Air Force, and Coast Guard personnel and their equipment.

If the wall doesn’t command your attention first, the 19 stainless steel statues displayed within the walled triangle will. Designed by Frank Gaylord, each figure stands more than seven feet tall and weighs nearly 1,000 pounds. Together, the statues represent a platoon on patrol and all Armed Forces branches are present (Army – 14; Marine Corps – 3; Navy – 1; Air Force – 1). Dressed in full combat gear, they stand amidst strips of granite and juniper bushes, which represent Korea’s rice paddies.

The mural wall stands nearby, and due to the granite’s reflective quality, there actually appear to be 38 soldiers reflected on its surface. The soldiers represent the 38 months of the war and the 38th parallel, which still forms the border between North and South Korea. 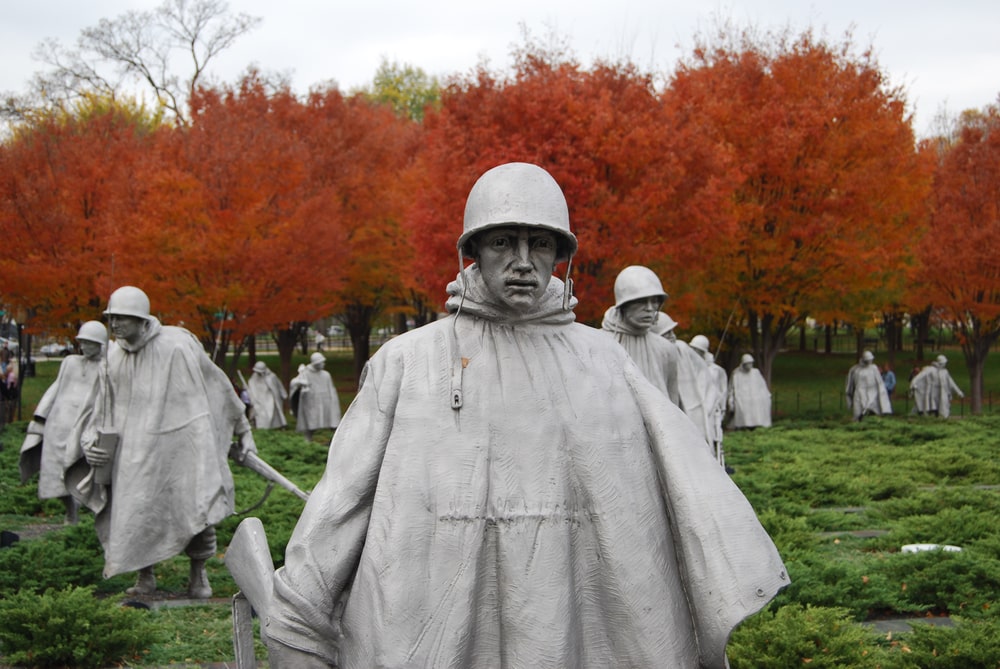 The Pool of Remembrance

At the head of the triangle sits the Pool of Remembrance, a shallow pool lined in granite and surrounded by trees and benches. Nearby, engraved granite blocks pay tribute to the lives affected by the war.

On the north side of the statues is the United Nations Wall. This wall lists the 22 United Nations members who contributed both troops and medical support to the war effort.

Permanent memorials ensure a lasting tribute for those who have been loved and lost. They also allow us, as people, to honor those we wish to always remember. Just as we create memorials for our heroes, we also create them for our loved ones. There are five key reasons why permanent memorials are important, whether it is to commemorate an event, a group of people, or just one person, like a close loved one. 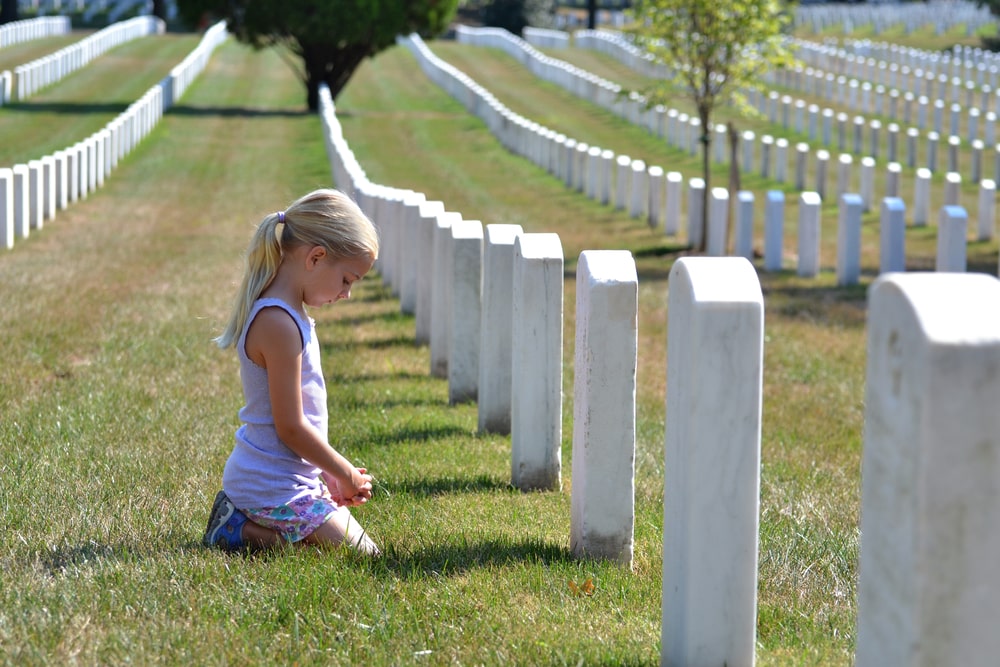 For many of our veterans, a large-scale memorial honors the group as a whole, as is the case with Korean War veterans and the Korean War Veterans Memorial. However, for individuals, families set headstones, grave markers, or inscriptions in place. Both types of memorialization are important and honoring to our veterans and our loved ones.

Want to Get Involved?

In 2016, President Barack Obama authorized the installation of a Wall of Remembrance at the Korean War Veterans Memorial. The Wall of Remembrance will specifically name the 36,574 Americans who lost their lives during the war. Funding is coming in from private donations. If you would like to help with this effort to honor veterans of the Korean War, please visit www.koreanwarvetsmemorial.org.

*In 2000, 5 years after the memorial’s dedication, it was discovered that a clerical error had been made and the total 54,246 included deaths that occurred outside the Korean War theater. The correct number is 36,574.