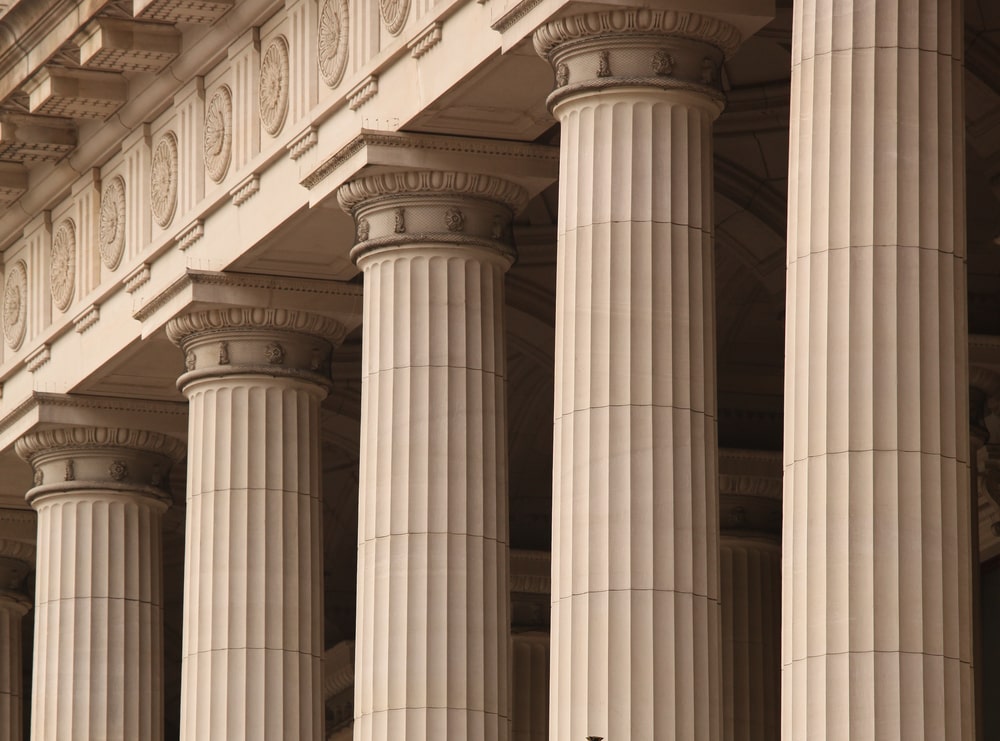 10 Famous & Inspiring Tombs Around the World

While the practical purpose of a tomb is to protect the dead, there are examples around the world that prove a tomb can be so much more than that. In some cases, tombs are a testament to human ingenuity, a beautiful declaration of love, a site for reflection and faith, or a place of reverence and remembrance. Today, let’s look at 10 famous tombs around the world and reflect together on the impact a single life can have and how long memories can last. 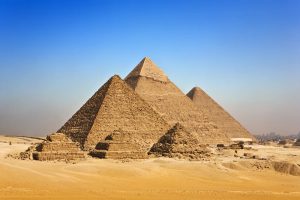 More than likely, you’ve heard of the Pyramids at Giza, but did you know that they were built as tombs for Pharaohs Khufu (father), Khafre (son), and Menkaure (grandson)? Long considered a wonder of the Ancient World, the pyramids not only housed the mummified bodies of the pharaohs but also any worldly goods the Ancient Egyptians considered helpful for the afterlife. It took an estimated 20,000 workers more than 20 years to construct the largest of the three pyramids. To this day, scholars still aren’t quite sure how the pyramids were constructed. Regardless, the three pyramids stood as the tallest man-made structures for more than 4,000 years. That’s pretty impressive for a tomb! 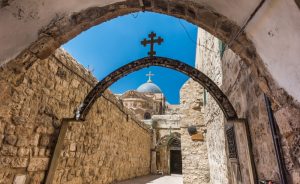 #2 – The Church of the Holy Sepulchre (Jerusalem, Israel)

In many Christian circles, the Church of the Holy Sepulchre is a place of reverence. When Constantine became emperor of Rome in 306 CE, he unearthed what was thought to be Jesus Christ’s tomb. After excavating it, he then built the Church of the Holy Sepulchre around the tomb. While the building has seen its fair share of damage, various Christian communities have restored it through the centuries. Today, six different Christian communities control the church, and they each have their own designated chapel inside it. With such strong ties to Christianity, it’s no wonder this particular tomb is important to so many around the world. 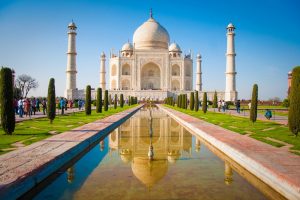 The Taj Mahal is perhaps the most romantic of the tombs we will discuss today. Completed in 1648, the Mughal emperor Shah Jahan built the Taj Mahal as a breathtaking final burial place for his beloved wife, Mumtaz Mahal. With extensive grounds, the complex includes a mausoleum, a garden, and a mosque. Gorgeous in its detail, the all-marble building celebrates the love story between these two historical figures. A royal historian from Shah Jahan’s time described the relationship in his records. He stated that the two were close confidantes and possessed extraordinary physical and spiritual compatibility. When Mumtaz died in childbirth (with their 14th child!), Jahan built the Taj Mahal as an enduring tribute to her. At his death, he was laid to rest beside her, and to this day, they lay together – forever. 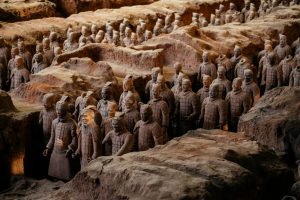 Next up is the mausoleum for the first emperor of China, Qin Shi Huang (c. 259–210 BCE), who unified China into a single political entity. He standardized scripts, weights, measures, and coins, while also improving roads and fortifications. However, perhaps what he’s most remembered for is his impressive burial complex with its famous Terracotta Army. With more than 8,000 soldiers, 130 chariots, 520 horses, and 150 cavalry horses, the Army is stunning from an archeological perspective. Every soldier has a unique facial expression, and each one has authentic clothes, weapons, and hairstyles (different from each other!). No doubt intended to protect the emperor in the afterlife, archeologists believe there are still more soldiers, horses, and chariots to uncover in the years to come. 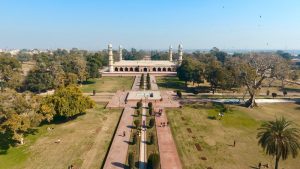 #5 – Tomb of Jahangir (near Lahore, Pakistan)

Colorful and intricately tiled inside and out, the Tomb of Jahangir commemorates the life of Mughal emperor Jahangir. His son, Shah Jahan (remember him from the Taj Mahal?), built the mausoleum 10 years after Jahangir’s death. At the time of his rule (1605-1627), Jahangir was popular amongst his people, though a bit infamous for marrying 12 times and indulging in alcohol. With a walled garden and 98-foot-high minarets, the impressive structure also includes two entry gates and a white marble sarcophagus covered in its own delicate mosaics. For many, the Tomb of Jahangir is considered one of the most beautiful buildings in Pakistan! 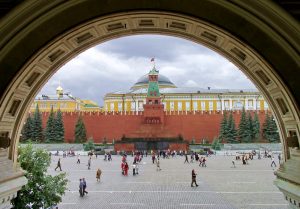 Located in the heart of Moscow, the Lenin Mausoleum commands attention in Russia’s historic Red Square. Inside rests the mummified body of Soviet leader Vladimir Lenin. What’s perhaps most interesting (and disturbing) about Lenin’s final resting place is that his sarcophagus is made of glass and is kept at a temperature of 61 °F (16 °C) and a humidity of 80 – 90%. Why? In order to ensure that Lenin’s body remains as lifelike as possible. In fact, a team of dedicated embalmers maintain the body, and his suit is typically changed every three years. While Lenin wanted a traditional burial beside his mother, Joseph Stalin ordered the display of Lenin’s body. Today, however, many Russians believe Lenin’s wishes should be honored and his body re-interred. 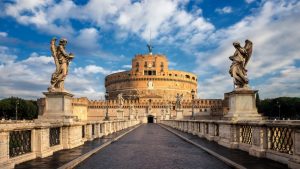 If you’ve ever visited Rome, you’re probably familiar with the Mausoleum of Hadrian (also called Castel Sant’Angelo). Both a castle and a fortress, the mausoleum houses the remains of many Roman emperors, including Hadrian, Marcus Aurelius, and most emperors from the High Empire. Built as a burial place for Hadrian and his family, the castle was once the tallest building in Rome! Situated on the Tiber River, Castel Sant’Angelo is made of brick and stone with a majestic statue of the Archangel Michael at its peak. Today, it stands as a remarkable addition to Rome’s collection of ancient and historic buildings.

Much like Westminster Abbey (also worthy of this list), the Paris Pantheon is both a church and a mausoleum. Commissioned by King Louis XV, its design combines the simplicity of gothic architecture with classical Greek elements. Inside, paintings depict the life of St. Genevieve (the patron saint of Paris) and the history of the French monarchy. Today, the Pantheon mainly serves as a final resting place for French heroes. Those laid to rest include Voltaire, Jean-Jacques Rousseau, Victor Hugo, Pierre and Marie Curie, Louis Braille, and Alexandre Dumas. Situated atop the Montagne Sainte-Geneviève, the Pantheon is a striking addition to the Paris skyline. 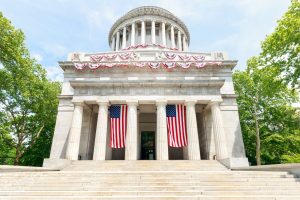 As the largest mausoleum in North America, Grant’s Tomb testifies to the gratitude people felt for the man who ended the American Civil War. As the Commanding General of the Union Army and later President of the United States, Ulysses S. Grant endeared himself to the American people. After his death, approximately 90,000 people from around the world donated over $600,000 (roughly $18.4 million in 2023 money) toward the construction of Grant’s Tomb. It was the largest public fundraising effort of the time. With mosaics depicting key events of the American Civil War, the granite and marble tomb was completed in 1897. Over a million people attended its dedication ceremony. Today, the US National Park Service maintains the memorial and ensures that it is well-preserved. 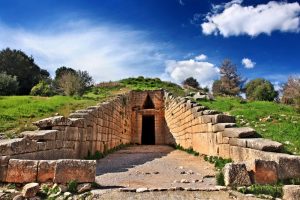 #10 – The Tomb of Agamemnon (near Argos, Mycenae, Greece)

Have you heard of the Tomb of Agamemnon (also called the Treasury of Atreus)? It’s perhaps the finest surviving example of a tholos or beehive tomb we still have from Mycenaean Greece. Built around 1250 BCE, it’s unknown whom the tomb was intended for or if it ever housed treasures. However, legend says that it was the final resting place of King Agamemnon. One of nine beehive tombs in the area, the doorway is 18 feet high (5.4 m) and tapers at the top (like a beehive). Inside, the tomb consists of two rooms, and the stonework throughout is decorated with bronze rosettes. The architectural skill and craftsmanship needed to build the tomb is impressive, and the tomb remains an important part of our historical narrative for Ancient Greece.

While such large tombs are now typically out of style, the need to honor and commemorate a loved one’s life still remains. That’s why it’s so important to consider a permanent memorial for yourself or a loved one. Whether it’s a headstone in a cemetery or a simple plaque on a cremation niche, it’s important to remember, to honor, to reflect. People matter, and we can keep their memory alive with loving physical tributes. To learn more about the value of permanent memorials, take a moment to read 5 Reasons to Establish a Permanent Memorial.