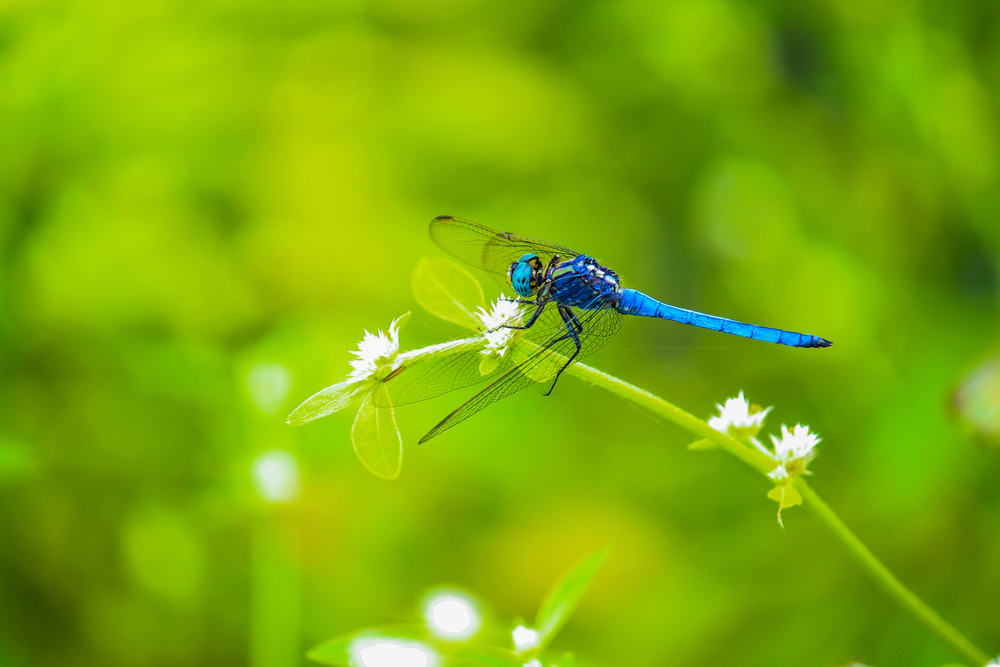 I’M OKAY, MOM AND DAD From Chicken Soup for the Grieving Soul

When I returned home from the funeral of a church member, my grown daughter, Jenny, asked me about the service. I had been very moved by a story the priest told about a dragonfly, so I shared it with Jen.

About a week later one of the water bugs climbed up the lily pad and emerged on the other side. As it sat there, it transformed into a dragonfly. Its body took on an iridescent sheen, and four beautiful wings sprouted from its back. The dragonfly flapped its wings and took off in flight, doing loops and spins through the sunlit sky. In the midst of its joyful flight, it remembered the promise it had made to return and tell the other bugs where it had gone. So the dragonfly swooped down to the surface of the water and tried to reenter the water, but try as it would, it could not return.

The dragonfly said to itself, Well, I tried to keep my promise, but even if I did return, the others wouldn’t recognize me in my new glorious body. I guess they will just have to wait until they climb the lily pad to find out where I have gone and what I have become.
When I had finished relating the short story, my daughter said, with tears running down her cheeks, “Mom, that’s really beautiful!” I agreed, and we talked for a while about it.

Two days later, early Sunday morning, July 9, 1995, Jenny came into my room, waking me to say good-bye before leaving for work at a resort on Lake Okoboji. I hugged and kissed her and told her I would see her that night when I joined her for a week’s vacation at the lake. I asked her if she had eaten breakfast and if she was wide awake, as we had been out late the night before. I knew she was tired.

Several hours later, our worst nightmare began. Jenny had been involved in a head-on collision and was flown to Sioux Falls, South Dakota. Thoughts crowded in on me. Why hadn’t I fixed her breakfast? Did I tell her I loved her? If I’d kept her with me a few minutes longer, would things have turned out differently? Why hadn’t I hugged her a little longer? Why hadn’t I kept her home with me that summer instead of letting her work at the lake? Why? Why? Why?

We flew to Sioux Falls and arrived at noon. Our Jenny was hurt mortally, and at ten o’clock that night, she died. If God had given me a choice, I would have traded places with her in a second. Jenny had so much to give this world. She was so bright, beautiful and loving.

On Friday of that week, my husband and I drove to the lake to see family, and we stopped to see where the accident had occurred. I don’t remember a lot, but I know I was hysterical trying to figure out what had happened and why.

Leaving the scene of the accident, I asked my husband to take me to a greenhouse, as I needed to be around beautiful flowers. I just couldn’t face anyone yet.

Walking to the back of the hothouse, I heard the fluttering of wings as if a bird or hummingbird was hitting the top of the roof. I was looking at a beautiful rose when a beautiful, large dragonfly landed within arm’s length of me. I stood there looking at this lovely creature, and I cried. My husband walked in. I looked at him and said, “Jenny is telling us that she’s okay.” We stood and looked at the lovely dragonfly for a long time, and as we walked out of the hothouse, the dragonfly remained on the rose.

A couple of weeks later, my husband came running into the house telling me to come outside quickly. When I walked out our door, I could not believe what I saw. There were hundreds of dragonflies flying in front of our house and between ours and the neighbor’s. I have never seen that many dragonflies at once in town, and the strangest thing about it was that they were only by our house.

There is no way these two experiences were just coincidences. They were more than that. They were messages from Jen.
Each time I see a dragonfly, beautiful memories of my daughter kiss my grieving heart.