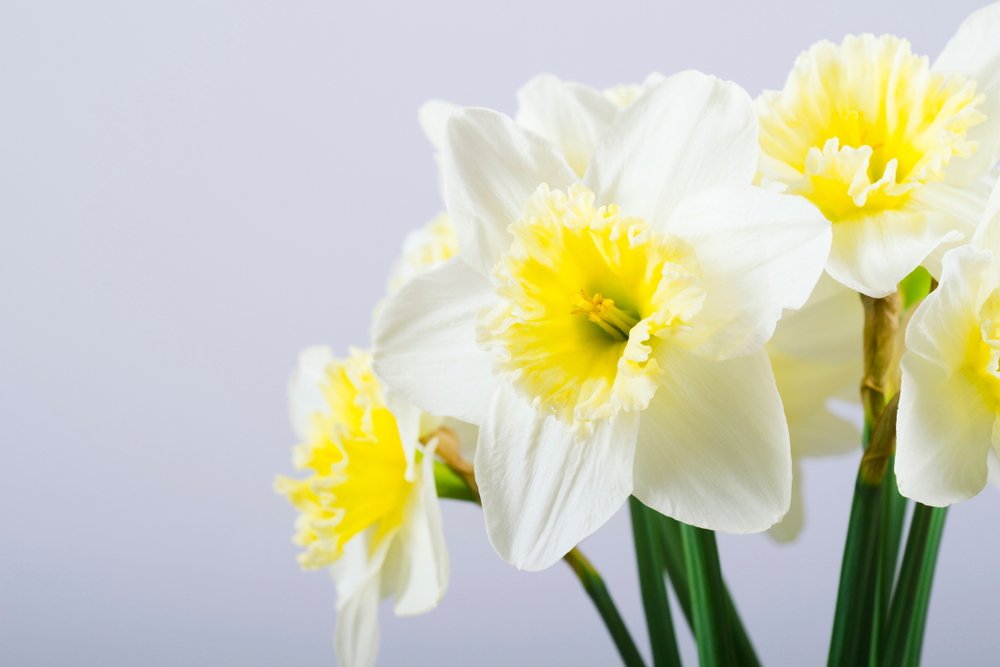 Mother opened her eyes and stared, unblinking, at the vase of daffodils on the table beside her hospital bed. “Who sent these beautiful flowers?” she asked in a barely audible voice.

“No one sent them, Mother.” I squeezed her hand. “I picked them from your yard. It’s March—Daffodil Month.”

She gave me a weak smile. “Promise me something?”

I nodded. I’d promised a lot since we’d come to accept that the cancer in Mother’s pancreas would soon take her life.

“Promise that before you sell my house, you’ll dig up my daffodil bulbs to plant in your yard.”

I tried without success to hold back my tears. “I’ll do that, Mother. I promise.” She smiled and closed her eyes, lapsing again into the twilight fog that characterized the last days of her life.

Before Daffodil Month ended, Mother was gone. And in the weeks that followed, weeks so grief-filled that my siblings and I resembled nothing so much as walking zombies, we emptied her house, painted, washed windows, cleaned carpets, and listed the home we’d grown up in with a real estate agency. We hired a neighborhood boy to take care of the yard.

And I gave the daffodils, which had long since quit blooming, not a single thought until a day in late autumn when the house was finally to be sold. My brother and sister and I were to meet the buyers to sign papers early on a morning that I knew would be filled with conflicting emotions. On the one hand, it was good to be out from the burden of owning an empty house. On the other, we would soon be turning over the keys to our family home to strangers.

Strangers who, I was certain, could never love it as much as we did.

Would this new family cook Fourth-of-July hamburgers on the brick patio grill my dad had built so many summers ago? Would their children spend fall afternoons raking the leaves under the giant maple tree into a mile-high pile to jump in? Would they figure out that one corner of the family room was the perfect spot for a Christmas tree? And would they be amazed at what pushed its way out of the ground in Mother’s yard every spring?

Crocuses. Flowering onions. Hyacinths. And hundreds and hundreds of daffodils.

Daffodils! Eight months later, I suddenly remembered the promise I had made my mother as she lay dying. I tossed a shovel and a cardboard box into the trunk of my car and headed for the house and yard that would, in just a couple of hours, belong to someone not related to me.

There was no sign of daffodils anywhere, of course. They had long since been mowed down and were now covered with leaves. But I knew where they were. Ignoring the fact that I was overdressed for gardening, I plunged the shovel’s point into the dirt, lifting out a clump of bulbs, and tossed them into the box. Working my way down the fence line, I harvested dozens of daffodil bulbs.

But I left more than I took, certain that the family who’d bought my mother’s house would take delight in her lovely harbingers of spring.

As do I. It’s been more than five years now since my mother passed away. But every March, I gather armloads of the bright yellow blossoms from my own yard and put them into vases. Some I use to decorate my house. Others I take to the cancer wing at a nearby hospital.

“Who sent these beautiful flowers?” a dying patient might ask.

And I will squeeze his or her hand and look into eyes clouded by that all-too-familiar twilight fog and speak words that I believe with all my heart to be true. “My mother sent them, especially for you,” I’ll reply. “It’s Daffodil Month, you know.”